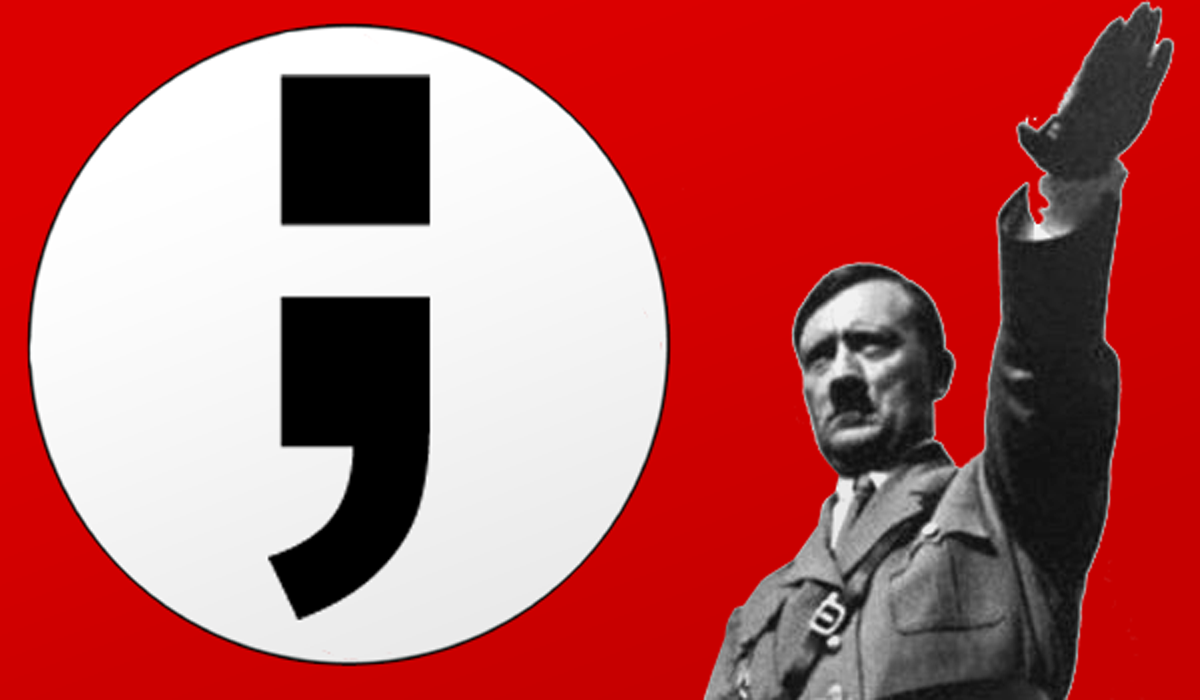 People who call themselves ‘Grammar Nazis’. Have you ever met these people? They’re the worst.

I meet them too often. Because I’m a copywriter, they expect to find in me a kindred spirit. Someone who shares their passion for the pernickety. It’s a bit awkward, because as a professional I do care about correct language and style. But I also believe the English language is a fluid and flexible thing.

I think writing is more about ideas and communication than proper comma usage. And many of the best writers cannot explain the technicalities of the latter.

One self-professed Grammar Nazi I know flat refuses to interact with people who don’t use proper sentence case and punctuation. On Facebook.

It’s a silly stance that equates one characteristic of a person with their value as a human being. A bit like the real Nazis did.

Now, I’m not saying that people shouldn’t have passionate views on the English language. It’s just that some people take it way too far.

So for everyone who’s ever been bullied by one, here are five ways to outsmart a Grammar Nazi and get them off your back for good.

1. Ask why they aren’t millionaires

In my experience, grammar Nazis are rarely professional writers themselves (and vice versa). They often aren’t that successful in whatever it is they are doing with their lives either.

On the other hand, I’m sure we’ve all met nice, successful business people whose emails read like the scrawlings of an eight-year-old.

If grammatical correctness is so important, how can that be? Ask your Grammar Nazi friend and watch them struggle for an answer.

Obsessing over grammar in everyday life is boring and pointless.

Describing yourself as a Grammar Nazi is an old, lame and somewhat offensive joke.

So all you really have to do beat a grammar nazi bully is show how tedious you find them. Ignore them. Yawn loudly. Show you’re above their fascist ways and you’ll score a fine moral victory.

Like all small-minded people, grammar Nazis are never as clever as they want you to think. Their own writing is usually far from perfect, which would be fine if they weren’t claiming to be experts.

So try catching them off guard. Ask them politely about something commonplace but complicated – like the rules for using their beloved semicolons or the difference between active and passive voice.

They’ll ‘um’ and ‘ah’ for a bit, as they try to formulate a plausible answer. You’ll see the cogs turning slowly in their minds. Then they’ll come out with something that is either full of uncertainty or just plain full of crap. This is the moment where you’ve won.

One of these should do it:

“Great books are weighed and measured by their style and matter, and not the trimmings and shadings of their grammar.” – Mark Twain

“I don’t know the rules of grammar. If you’re trying to persuade people to do something, or buy something, it seems to me you should use their language.” – David Ogilvy

Most of the rules grammar Nazis love to talk about aren’t really rules at all.

The truth is, English doesn’t have many concrete laws. Its grammar is changing all the time and is very much open to creative interpretation. That’s one of the reasons English is loved the world over.

For example, did you know that the famous split infinitive rule is actually derived from Latin, a long-dead language? Stick to it too closely in English and you end up with some pretty unnatural-sounding sentences. Like “She used secretly to admire him.”

Add more myth-debunking knowledge to your arsenal with this handy post over at Grammar Girl. Then use it to bamboozle and best your grammar nazi foes.

Got those? Then you’ll soon be free of the grammar nazi’s taunts at last. Don’t really laugh in their faces though, it’s not nice.

Our copy editing service doesn’t judge – we just help you get your web pages, emails, ads, reports and more into clear and correct English! Click below for details.